This special recipe is dedicated to Anna.
“Holy guacamole” not only makes us laugh – it jettisons us back
to our fond and flavorful days in Italy. Long live “Tes Mes” Day
and food comas!
~   ♥   ~

Homemade in February 2018 and promptly sent to the freezer, we later released this guacamole from its icy resting place to celebrate Super Bowl 2018 almost 50 years after the recipe was published.

I can promise you this is the first time I’ve made *then not quickly devoured* a delicious bowl of the green stuff but I was following my Mom “Betty’s” recipe clipped from the San Antonio Express-News as an experiment (see the recipe below). The recipe’s intent was to freeze before eating.

The results? Quite surprising!

I agree – it seems odd at first but if you dial back the timeline to the 1960s/1970s the home economist (our Mothers) thirsted for ways to run an efficient kitchen. So freezing guacamole is a great way to prepare for your party without having to do all the work in the heat of the moment.

Back in the day freezing guacamole was considered “normal stuff,” like prepping your wardrobe or your “to dos” for the great day ahead. Brilliant forethought!

To Texans guacamole is right up there in the inner circle of sanctity along with queso, big hair, and cowboy boots. These are the things we place high and mighty on our list of things to cherish. To literally “mess with Texas” is to tamper with one of its revered staples so you can image I was nervous about tinkering with the obvious – to divert from the culinary mission to make then eat in “normal” fashion.

To my family guacamole is a treasured treat. While we don’t necessarily enjoy “guac” for breakfast, lunch, and dinner like most outside our state might think – guacamole holds its place in our hearts as a “constant craving” food we keep near and dear.

I Feel The Same Way, Linus

My Mom “Betty” truly loved guacamole. And she loved enjoying it alongside all of the wild and delicious Tex-Mex varieties we could consume while living in the unique pureness of San Antonio (rah, 78209-ers!) 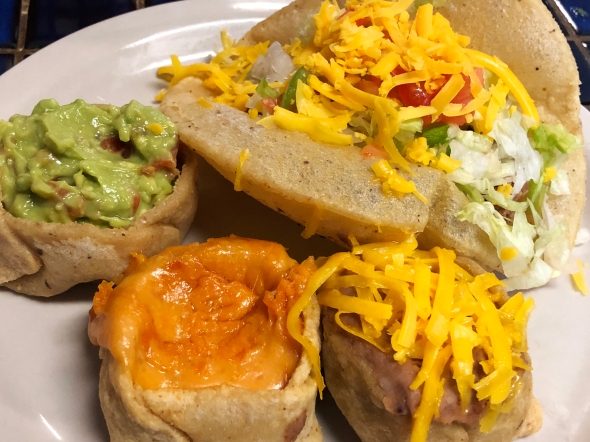 I Like My Puffy Taco Flanked By The Royal Line Up Of A Guacamole, Cheese, And Bean + Cheese Cups.
Nom. NOM!

One of our most special restaurants was — and still is — Teka Molino — which has some of the greatest food in the region (sorry, Nation, you do not qualify). Heck, I sometimes drive 97.8 miles from Round Rock to San Antonio just to enjoy Teka’s puffy tacos, bean rolls, and I always get a guacamole cup; a pot of gold served from masa fashioned into a cup which has been delicately deep fried.

I’ve lived north and south in Texas and I can promise you there’s nothing more tastefully authentic!

Considered My “Finer Attire” This T-Shirt Sums It Up Best

So let’s dive deep into this guacamole and experience one of the greatest culinary gifts — glorious holy guacamole!

❤  Guacamole isn’t just a dip for chips, it’s a great plus-up to queso, enchiladas, tacos, soups, and it brightens a sad and lonely spoon (oh, yes I have!). Guacamole’s best friends include the nacho chip, the Fritos Scoop, and its often found mingling atop a properly dressed grilled hamburger, along with its farm-raised kissin’ cousins Mr. Bacon and Ms. Monterrey Jack Cheese.

❤  Nobody likes tired, ol’ brown guacamole. To extend your guacamole’s zest for life give it a slight squeeze of lime on top prior to serving. You can also store it overnight by placing cling wrap on top of the guac and lightly smoothing it out to remove any trapped air.

❤  I usually forage for the best ripened avocados from the bottom of my local market’s produce container. If I’m reluctantly forced to choose from pre-ripened avocados I’ll place them in a sunny window for a few days to help ’em along their way.

❤  My brow raised when I saw this recipe calls for parmesan cheese. It isn’t because I don’t love parm, but I’ve never had it alongside guacamole. And, while this recipe calls for lemon, lime is a citrusy suitable sibling. Lemon and lime go together like PB&J, cheese and wine, or a smile birthed from puppy kisses. I prefer my guacamole fork-mashed and chunky but I can respect why a blender was used given the culinary movement of the era.

After digging into the author’s past below I discovered she hailed from South Carolina. Hmm. So while I’m not saying this guacamole isn’t authentically Texas because of lemon and parmesan cheese I’m just noting the special twist Ruby Lou brought to this guac. Guacamole is a wonderfully inclusive dish that pairs well with others!

❤  Can’t get enough avocado? Explore some of the other recipes by clicking “avocado” in the ingredients word cloud list in the righthand menu. Don’t miss my Mom’s most special flavorful twist on potato salad made with avocado, bacon and sour cream instead of the typical mayonnaise. It’s a “Best Of The Best” recipe that has become a family tradition.

To prepare: About 15 minutes.
To thaw: 1 ½ – 3 hours (depends on the depth of your guacamole)
To enjoy: Mere nanoseconds

iii. What to do

1. Place your lemon juice in a blender.

2. Peel and quarter the avocados and tomato. Wash and dry the green onions and remove the chive tops. (Whoops — we accidentally included them and it was the more the merrier!) Remove the seeds from the jalapeños (we included them for more texture). Chop the garlic into small pieces. Add the avocado, tomato, onion, jalapeños and garlic to the lemon juice.

3. Cover the blender and run it on high speed until everything is smooth. Turn the guacamole onto a flat serving dish and place it in the freezer long enough to form a frosty crust. You can prepare this several days ahead of time if wrapped for freezing (we used Ziploc freezer bags).

4. To thaw allow 1 ½ – 3 hours depending on the depth of the your guacamole. Sprinkle with parmesan cheese and serve with corn chips or your favorite sidekick.

I Siphoned Off Some Potato Salad For A “Potato Salad Shooter.” A Perfect Way To Enjoy Your Day!

Who Was Ruby Lou Potts?

She penned the recipe (above) that caught my Mom’s eye. I found this old newspaper article about her which lends more detail about the era this recipe was likely penned.

Since 1952, Nell Read (who later became Nell Read Carraway) has signed these popular weekly articles on food produced by the Home Service Division of City Public Service Board.

When Mrs. Carraway retired at the end of June, Ruby Lou Potts moved into her job as Home Service Supervisor and, with today’s article, becomes the author of “Bexar Cupboard,” an exclusive feature carried Tuesdays in the San Antonio Express.

Mrs. Potts needs no introduction to followers of “Bexar Cupboard.” She has been a home economist with CPSB since 1958 and has frequently been photographed for the column, demonstrating food preparation. Mrs. Potts holds a degree in home economics from Winthrop College in Rock Hill. S.C. She is a former home economics teacher and dietician. She and her husband, William Robert Potts, have two sons. Bob, who lives in Houston, and Charlie, who is serving in the Marine Corps in Vietnam.

Mrs. Carraway has chosen to retire early in order to enjoy her family. When she married Ben Carraway three years ago she acquired four grandchildren, a daughter and a son-in-law. “I have a wonderful family,” she says, adding that she wants to become a full-time homemaker and do for her family the work she has taught so many for so long.

She has been with the City Public Service Board for 41 years and for 37 as Home Service Supervisor, in this capacity she and her staff have helped women of San Antonio with countless problems encountered in running a home. Mrs. Carraway’s work with the annual San Antonio Livestock Show has brought about the organization of the Women’s Division which sponsors competition in cooking, baking and preparation of food and pastries. 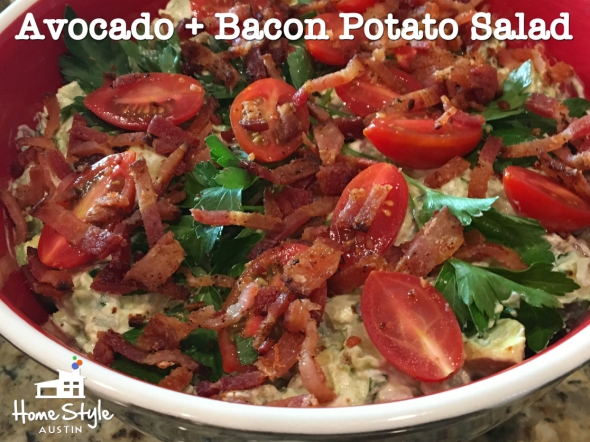 Also Known As “California Potato Salad” This Dish Is Deliciously Dy-No-Mite!
Home Style Austin? One Of My Other Blogs! I’m THAT Into Food!
I Have A Third Blog To Boot called ForTheLoveOfItaly.com

Fun fact: Avocados are considered single-seed berries — not vegetables. Who knew? Not me! Read more!

Let’s have a closer look at the greatness of Teka Molino: