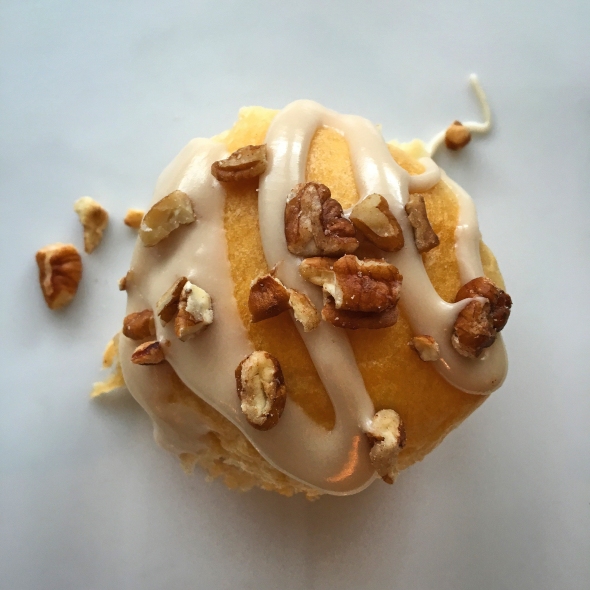 This recipe is a Pillsbury Bake-Off® winner from time warp October 20, 1969! It marked the first time a refrigerated dough won the Bake-Off’s grand prize. Hats off to you, Edna Holmgren Walker (at right), for winning the grand prize that landed you in the Pillsbury Hall Of Fame and into the hearts and tummies of foodies across the globe. And thank you my Mom “Betty” for snagging this recipe so that I could enjoy it!

I think if you were to shout out “Pillsbury” in your local grocery it would soon be echoed with a “Doughboy!” But second to Snuggles, who annoyed my good childhood friend Scotty, the Pillsbury Doughboy just creeps me out. He’s always in a over the top good mood and his platter sized dilated pupils are super freaky. His laugh? Me, oh my!

The web is flooded with jokes and videos about the doughy guy. I even found his “fauxbituary” that said he died of a yeast infection caused by being poked in the stomach too many times. This commercial, however, is probably one of my favorites of him – it features Maureen McCormick in a spot from before her Marcia Brady stardom. Marcia! Marcia! Marcia! Thank you for practicing your singing before making what might have been something other than a Sunshine Day.

All kidding aside, the Pillsbury crescent rolls make the perfect wrapper for these sweet treats.

❤  Fine dining for two – four? You can half this recipe if you don’t want 16 magical puffs. Or you can make all 16 and get your crazy magic marshmallow puffs on! 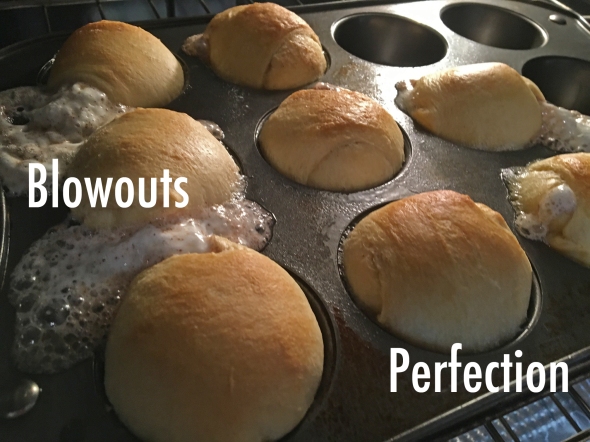 ❤  I read on some blogs that folks thought it was normal that the puffs had a coating of the marshmallow mixture inside, but otherwise the puff had blown a tire during baking. I absolutely disagree. Obviously there’s an art to creating the perfect magical mouthwatering gooey marshmallow puff and about half of my first batch turned out with no white explosion. Why, look at Edna’s vintage picture above – do you see any exploded puffs? Zero. I tasted both blown and unblown puffs and will eagerly testify in foodie court that these are best enjoyed with the entire marshmallow intact inside the perfect puff. That’s the magic! 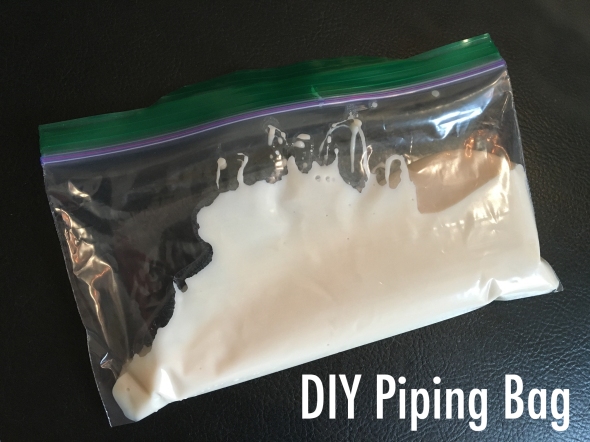 ❤ Need a piping bag in a pinch? You can fashion one out of a snack bag by inserting your icing and snipping a wee bit of the corner off. Works like a charm!

❤ Here in Texas “nuts” is an abbreviation for “Texas Pecans.” Giddy up!

❤ On my next go of these, I’m going to sprinkle a little fairy dust on top of these magic puffs. By fairy dust I mean crumbled bacon. Mmmm… bacon!

1. Combine the sugar and cinnamon and set aside.

2. Separate the two cans of crescent dough into 16 triangles.

3. Dip a marshmallow in the melted butter then roll it in the cinnamon-sugar mixture. 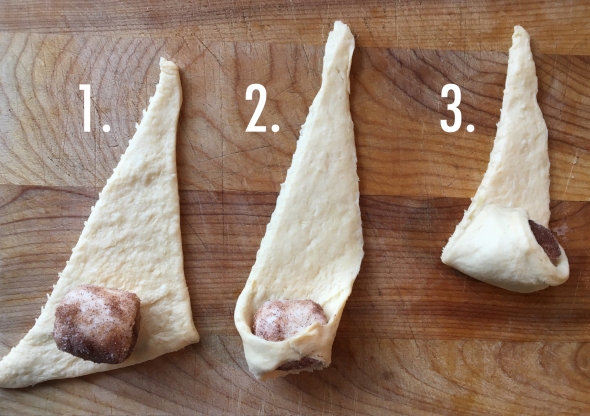 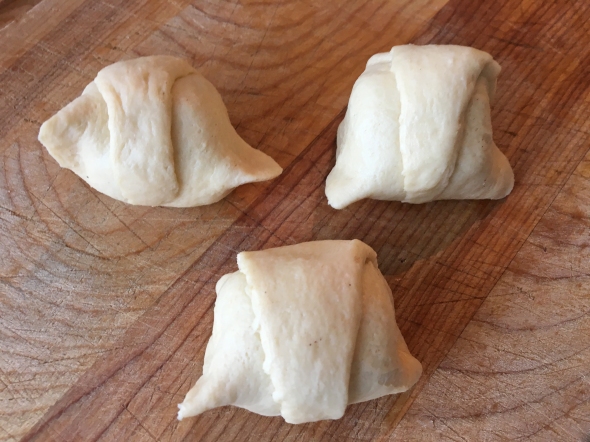 5. Dip the pointed side of the puff into butter and place the buttered side down in a greased deep muffin pan. Repeat the process until all your puffs are prepared.

6. Place the muffin pan on a baking sheet and bake for 10-15 minutes, until golden brown.

7. Remove the puffs from the pan and drizzle with your icing mixture. Sprinkle with your pecans and serve warm. Note: While Mrs. Holmgren’s recipe below called for immediate removal and topping I ate my magic puff too fast and it was hot-hot-HOT! I’d suggest letting these rest a few minutes but don’t let them get cold. Nobody likes a cold magical marshmallow puff! 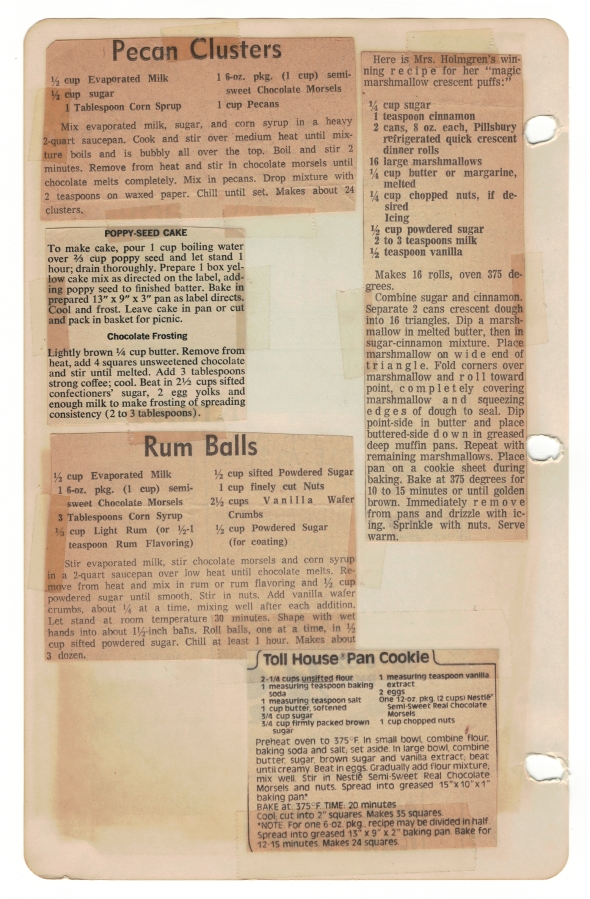 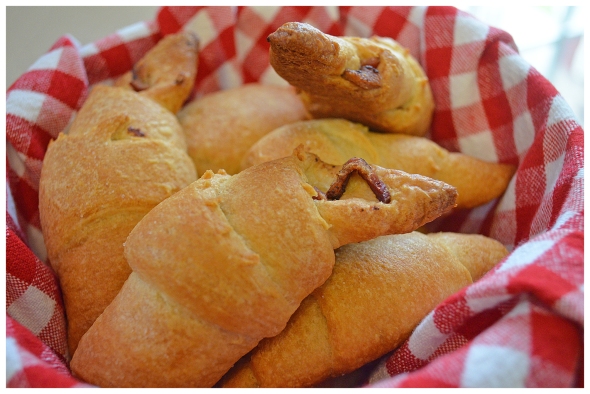 These tasty bacon roll-ups are such an “easy-do”
Enjoy this family recipe from Betty and me to you
A savory bacon-y sensation in every single bite
Serve ’em warm with sweet tea and they’ll certainly delight!

♥  When cheese heard it wasn’t invited to the roll-up party it was pretty sad.  :*(  Next time we’ll toss-in a little shredded Trader Joe’s 4-Cheese blend (a tasty mix we lovingly call stinky cheese) to help liven the roll-up party.

♥  I used to be on a black peppered bacon kick but for this I used Applewood smoked bacon.

♥  If your bacon isn’t super crunchy it may be hard to crumble. I used kitchen sheers to help me cut things into shape.

♥  Dividing 6 pieces of crumbled bacon into 8 equal portions can seem tricky. I spread the bacon crumbles on a round plate, divided them into half, then I halved the halves again and then each half I halved again. The result? A lot of halving plus 8 mouth-watering piles of bacon-y deliciousness that were pretty close in size. Shazam!

♥  If you dream in Bacon-Vision then make sure and check my favorite Trader Joe’s Bacon Cheesebread recipe or click the little “bacon” word at right … riiiiight there between avocado and baking soda! Yes! Clicking the “bacon” link will load-up all the recipes here at Betty’s Cook Nook that contain bacon … including my all-time favorite California Potato Salad. The magic of bacon!

1. Cook 6 slices of the bacon until they are crisp. Drain, pat dry (or rest between paper towels) then crumble.

3. Separate crescent rolls from the package. Sprinkle each with a little onion salt. 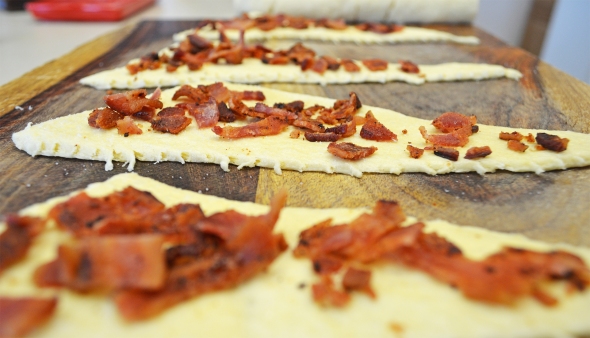 4. Take ⅛ of your crumbled bacon and sprinkle on each dough triangle.

5. Roll-up the dough starting at the wide end. Place on a baking sheet, point side down. Continue until you’re done with all 8 roll-ups. 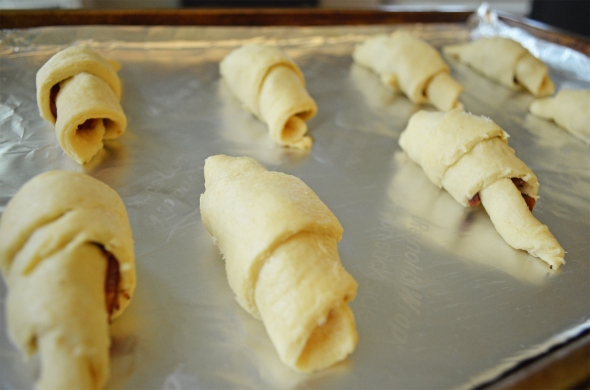 6. Bake in your oven for 10-15 minutes (do not overcook, like I did. My temperamental gas oven and I are on shaky ground with one another.)

Yields 8 bacon roll-ups and up to 8 happy people! 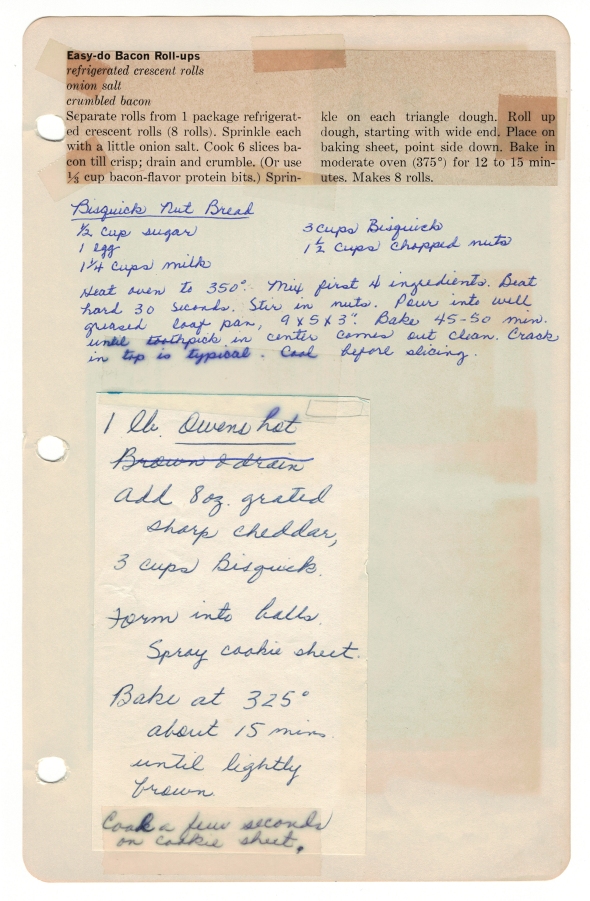