A Blast From The Past

After I safely recovered Mom’s cookbooks in 2011, I was quick to notice one thing missing – recipes from her Mom – Nanny. Nanny was the Grandparent I was closest to and she had a few “home run” recipes like her coconut-fruit (Ambrosia) salad, homemade chicken noodle soup and waffles served hot from the press. What’s not to like there?

I’ve been deeply saddened that Mom didn’t have any of Nanny’s recipes in her own cookbook but I find “the closer to home, the less likely you are to write things down.” This is certainly true with cooking as many of Mom’s favorite recipes were in her head – not on paper – so good luck to us all in documenting our family’s tried and tastefully-true recipes!

My family’s recipe void began changing earlier this spring when I visited Julie, who’s my 1st Cousin and our family’s much loved Matriarch. Julie has a mind like a steel trap, so after blogging my way through almost 100 of Mom’s recipes I decided to dig deeper; a trip to San Antonio with the specific culinary reconnaissance mission of recovering a few family recipes I didn’t have. And recover, I did!

In addition to Julie gifting me Nanny’s Iced Tea recipe, I scored the Grandmother-load of all – Nanny’s Barbecue Sauce Recipe (below) which we’ll get to in a moment. Why, in a moment? Well, for those of you who haven’t read most of Betty’s Cook Nook you may be disappointed to hear that I have the gift of gab which translates quite nicely online as I’m also fast-to-type (so was my Mom, Betty). So if you want a “CliffsNotes” version of this recipe, you best scroll down to this post’s “Foodie Tips” section and continue on. If you want to read a free and fabulous story about family and food, read on!

The Art Of Family Cooking

When creating Betty’s Cook Nook I knew I wanted to weave in family stories along with our recipes because to me, eating goes hand-in-hand with daily living for all of us regardless of geography, culture or perceived socioeconomic status. Celebrating great food and friends was something my parents Betty and Louis absolutely loved to do, so it just felt right to try to honor my Mom’s love for cooking by creating this blog so I could translate her conventional cookbook online for generations to come.

While my storytelling is primarily for my family, I’ve heard from several non-family members – even strangers – who say they love reading the stories so I know the true essence of my effort extends far beyond a handful of my closest family members, maybe even to you! So I want to share a really touching story about something that happened today that directly ties to this recipe in the most fantastic way.

For a few years I’ve enjoyed watching the TV series “Who Do You Think You Are.” I’ve seen some incredible stories uncovered through research. Because I lost my parents at a young age I have several family “holes” to fill, so last night after watching Valerie Bertinelli‘s amazing story I finally signed-up for a free 2-week trial at Ancestry.com. No, the folks at Ancestry didn’t pay me to write this post, but they should have. ;)

I was instantly addicted to my family’s online research – I’m quite skilled at online sleuthing, so Ancestry.com fits right up my alley. Within a few hours I had connected over 50 of my family members dating back to 1874. One of the most impressive things I quickly found was the address where my grandparents “Nanny” and “PaPaw” and my Mom “Betty” lived in 1944 thanks to a local city directory listing. Years after I grew-up in San Antonio, lived in Dallas 20 years then moved to Italy and returned to Texas in 2012. I learned they lived just 20 miles from where I live today in Austin, Texas … and I had no clue!

With their home address I was quickly able to find driving directions – even score a recent picture of the house from GoogleMaps.com. The home was a charming stone house, and the more I looked at the online photo I realized it looked strangely similar to one photo among the thousands of family photos that I have. It was well after midnight so I went to bed. At 4am hope and excitement woke me up. I pulled out the family photos and within 10 minutes had found the match for the online photo!

I knew I had to visit the house today. While the Google picture from the front of the street looked relatively the same with just a few modern updates to the carport and entry, I was nervous the house was no more as online records suggested their house had quadrupled in size. Today I bundled-up my two Labs “Boomer” and “Harley” and drove to Nanny’s and Mom’s old neighborhood and was thrilled to find that the house had not been torn down – it was doing just fine – including the two huge oak trees that flanked the 1981 family picture I have of the house (above).

The Way We Were

Standing in front of the house at 1701 Virginia Ave. here in Austin was a bit strange for me. While my feet were 70 years late arriving to the party, I felt an awesome peace; the peace that comes from discovering something special. I pictured the old 1938 stone house with my Mom “Betty” and her Sister “Delores” playing in the yard … then my Grandmother  “Nanny”, sticking her head out the screen door to summon her two girls to dinner.

Today, while I may have arrived 70 years late for dinner, I’m able to recreate one of their family favorites thanks to Nanny’s Barbecue Sauce recipe. So can you!

♥  This sauce works well with chicken, beef or pork. Feel the force!

♥  Julie said my Grandfather Harry would make a basting “sop mop” by wrapping a T-shirt strips around a stick. Feel free to create your own … or use a modern silicon basting brush shown above.

♥  What are those yellow wrappy-things below? They’re lemon cover stretch wraps and you can find them online or at a store near you! They make juicing lemons a seedless, pulp-less pleasure!

♥  A nice side for this dish would be one of my all-time favorites here on BCN – California Potato Salad. It’s that good!

1. In a large stock pot simmer everything uncovered until it’s all cooked down and reduced. While the original recipe below says “at least ½ hour,” my Cousin Julie was quick to point out that it takes much longer than noted! I think we simmered everything for about 2 hours, stirring every few minutes.

2. Taste and adjust the sauce as you like, because these measurements aren’t “exactly right!” Gottaloveit. 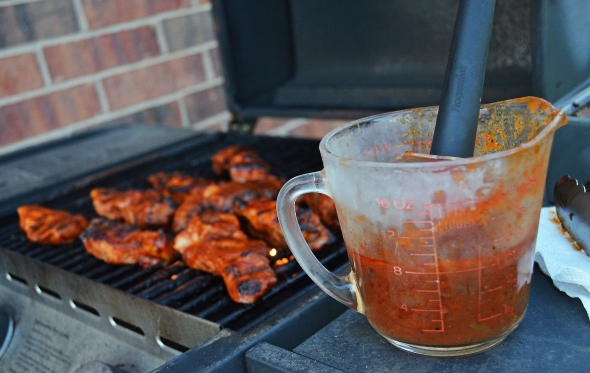 3. When the sauce is done to your liking, baste the meat on the grill with a sop mop or basting brush. We made sure to heavy-up on the last basting just before removing everything from the grill.

If you want to enjoy this the way Julie said our family did (throw away nothing), save the vegetables and serve them as a side dish for your barbecue meal.

♥  The vintage “Fire King” measuring cup above is my Mom, Betty’s; it has surely measured-up over the years and can probably tell bountiful stories about the families and friends it has fed! I alone can tell more than a few stories. :)

♥  Cousin Julie told me that when they lived in the old stone house my Grandpaw Harry worked at the IRS in Austin; turns out he was too old to enlist for WWII so worked this government job instead. What’s even more impressive is that my Mom (Betty) her Sister (Delores) and Delores’ Daughter Julie (my Cousin who was barely 2 in 1944) also lived in the house. It must have been a lively party of five, indeed! Delores also worked at the IRS which Julie said was “filled with women” as most men were off serving in the war.

♥  Cousin Julie said Nanny and PaPaw (Grandpaw Harry) would hose down the old stone house above in the hot summer days to keep it cool inside; these were days before air conditioning!

♥  Here’s my original scan of Nanny’s BBQ recipe – Cousin Julie said this was Nanny’s recipe penned by Mom’s sister Delores Sutton who is one of the most elegant ladies I ever met. I love her handwriting! The paper? It can tell a story all its own. Click the pic for a bigger view. 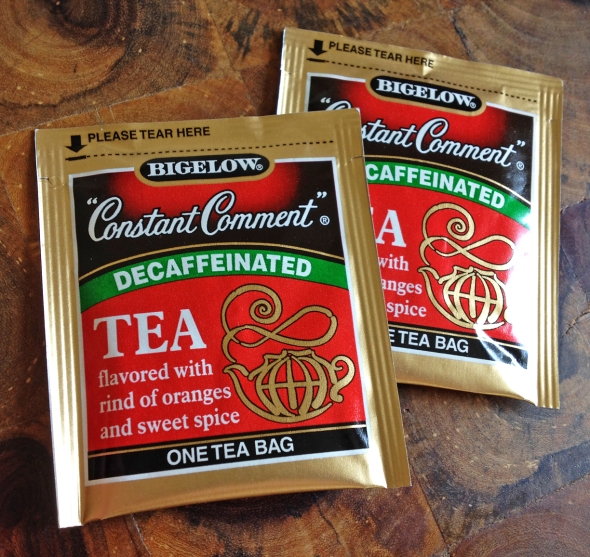 “Tea is a drink that just tastes better when you’re enjoying it with a friend or two.”

I just returned home to Austin from visiting my Cousin Julie in San Antonio and she always has a fresh pitcher of brewed tea on her kitchen counter. I had a glass of Julie’s tea and told her there was something special about it. She said the tea was made how my

grandmother “Nanny” liked it, so you know in a flash it became my newest-oldest favorite drink! Shazam!

Julie said Nanny would add a flavorful tea called “Constant Comment” to regular tea as she brewed it. She sent me home with a few bags of the stuff and now I’m brewing my tea the way my Grandmother liked it best. Since I haven’t enjoyed any of my Grandmother’s foods since she was living in the 1990s, this has become a way for me to celebrate my Mom’s Mom’s favorite beverages. Pretty. Darn. Cool.

Cheers to you, Nanny … and Julie!

♥  While I grew up drinking Lipton instant tea I actually think Luzianne makes a better brew.

♥  For brewing, I use a Mr. Coffee Iced Tea Maker.

1. Brew the tea as you normally would … but include one bag of the magical constant comment tea.

3. If you want to make it extra special, add a squeeze of fresh lemon and a friend or two – share the moments of the day over a great cup of tea.