Are You Bready For This?

After setting my appetite on making this twisted bread, I realized that Mom’s cut-out recipe had a seriously odd shape and some of the article was missing (see the original far below). I flipped the time-worn clipping over and realized that Mom must have really cut out the recipe on the reverse as the shape and article size were spot on. Finger to forehead!

What was on the back, er front, of the recipe? A 1970s story about NIOSA which included a recipe for Quiche Lorraine – a dish that garnered serious street cred at the 1968 World’s Fair held in my hometown of San Antonio. H.R. Pufnstuf debuted at the fair – something I just learned!

So now you have a funny story to serve along with this bread! 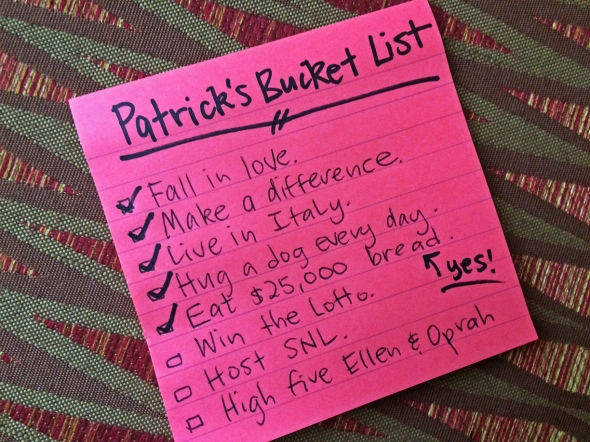 ❤  I’ve had a few foodie fails here at Betty’s Cook Nook. My first attempt at making the dough for this recipe is one of them! Turns out the yeast I had on hand was old and after mixing everything together I think the bread actually fell rather than rose. LOL. So make sure and score some fresh yeast from the store to ensure your bread will rise to the rooftops.

❤  Feeling a little insecure about my ability to rise bread, I resorted to some online research to look for tips. Warm ovens and heating pad suggestions aside, I netted out with boiling some water in a glass measuring cup to warm my microwave. I covered my dough-filled bowl with a towel, inserted it into the microwave along with the water and let it do its thing for an hour. The dough more than doubled in size. Magic!

❤  You can easily half this recipe. What I wound up with was about the size of a boogie board. You can also make two “half-sized” loaves by cutting the dough strips in half before braiding – what better way to give a $12,500, er $77,500 gift (post inflation) to a friend?!

❤  I’m not going to point out the obvious but since I obviously pointed something out … you can introduce any of your favorite ingredients into the filling for this twisted bread recipe. I’m thinking of ham and cheese or bacon and maybe a little scallion.

1. Grease a large cookie sheet and set aside. That was easy!

2. In a large mixer bowl dissolve the yeast in warm water. There’s no need to sift the flour – add 2 cups of the flour to the yeast mix (reserving the 2 cups of flour for later), and add the sugar, salt, water, milk, butter and egg. Blend at low speed until moistened then crank up the speed to medium and beat for 2 minutes. By hand, stir in the remaining 2 cups flour to form a soft dough. Mix it well! Cover the dough and let it rise in a warm place until light and it has doubled in size, about 45-60 minutes.

3. While the dough is doing it’s thing let’s make the filling. Melt the butter in a saucepan over medium heat. Add the remaining filling ingredients above and mix well. Let rest.

4. After the dough has risen, stir it down. Transfer from bowl then toss it around on a floured surface until no longer sticky. Roll the dough out to a 18″ x 12″ rectangle. Cut the dough into three 18″ x 4″ strips.

6. On your prepared cookie sheet, braid the 3 rolls together. Cover and let it rise in a warm place until light and doubled in size, about 45-60 minutes.

I loved this bread warm and fresh out of the oven. You could also slice it to make a savory sandwich bread.

Here’s a scan of Mom’s original recipe.
I joked above about the odd shape of this cut out. Here’s another Betty’s Cook Nook recipe with a funky shape!

It’s not a chicken dinner per se but today is your lucky day – I’m posting the reverse side of the Onion Lover’s Twisted Bread recipe! Go on, click on it for a larger view of what’s coming next to Betty’s Cook Nook!