Egg Nog With A Christmas Kick

In college I heard about a kitchen shortcut for making egg nog – buy the cartoned stuff from the grocery store then add an equal part of it with 7-Up or Slice. It resulted in a lighter drink as the soda helped “brighten” the drink. This was in a time before I received Mom’s cookbook back from her friend Bristol and discovered this classic egg nog recipe.

This egg nog recipe came from Mom’s dear friend Lela Swinny and it packs a lotta punch since it’s made with bourbon and rum.

Egg nog is to Christmas just like barrel racing is to the the Texas State Fair; the holiday’s aren’t complete without a glass or two of nog.

♥ The recipe card didn’t specify when to add the rum so it looks like Mom later added a note to include the rum right after the bourbon cooked the eggs.

♥ This just in – Bourbon cooks eggs? It’s true! You can read more online about the risks of consuming raw eggs but I’ve only consumed raw eggs sparingly and have turned out just fine.

♥ Please allow advance time to make this nog – details are below.

♥ As penned this recipe will make a large punch bowl of the frothy stuff. We halved the recipe and it made a pitcher which was enough to yield 6-8 glasses. 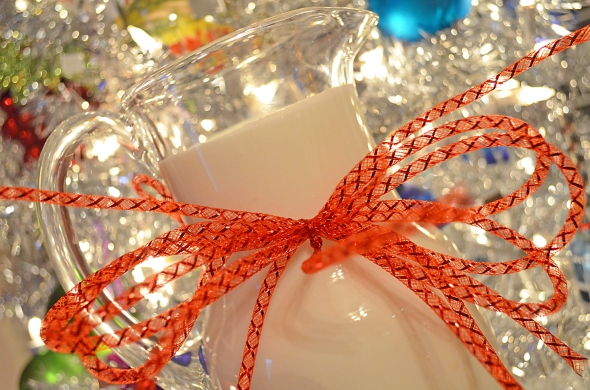 2. Beat the egg whites until stiff, then gradually whip sugar into the whites.

3. Mix the whipped cream into the yolk and whiskey-rum mixture.

4. Rinse a bowl with a pint of sweet milk and transfer the mixture to the bowl.

5. Gently fold in the egg whites.

6. The egg nog should be kept in the fridge overnight to ripen; it should have a good consistency and separate very little. You can mix it again before serving. 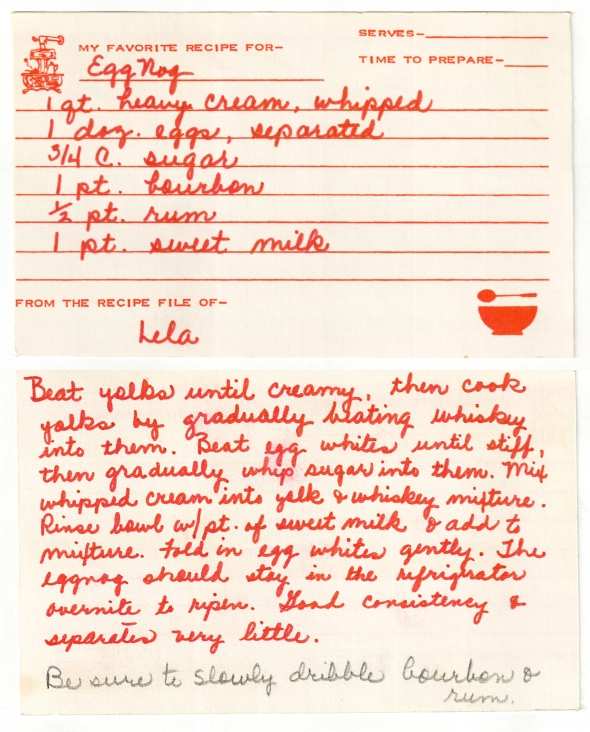 When I was growing up Lela Swinny lived at 3006 Northridge just 2 doors around the corner from my family.

The Swinny family was a delightful bunch of folks and my family spent almost as much time at their house as our own so naturally “fooding” was a part of the times our two families shared.

Mom’s dear friend “Lela” taught me many things ~ the joy of laughing, how to swim in their awesome pool and how to cook this memorable breakfast treat called “egg in a nest.”

You’ll find a picture of Lela and me in the old family photo album here on Betty’s Cook Nook. 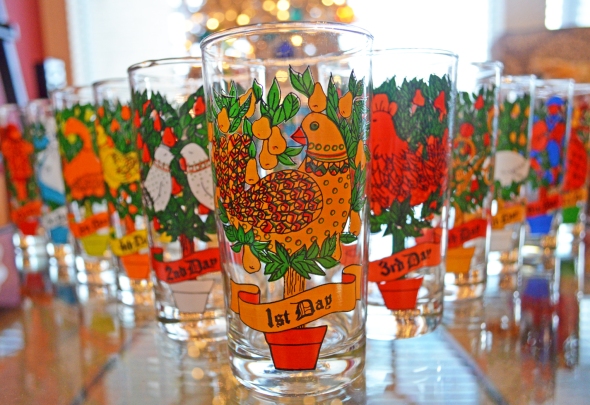 Aside from the Grinch, who celebrates the holidays without rum balls?

Rum balls are a nostalgic favorite.

This no-bake recipe will surprise you with its super-amazing taste; a nutty, chocolatey mouth-watering sweet that tickles your tongue with the delightful dismount from a pleasing punch of rum. Yeah. Makes me want to “scarf” a dozen.

1. Stir evaporated milk, chocolate morsels and corn syrup in a 2-quart saucepan over low heat until the chocolate melts.

2. Remove from heat and mix in the rum and 1/2 cup powdered sugar until smooth. 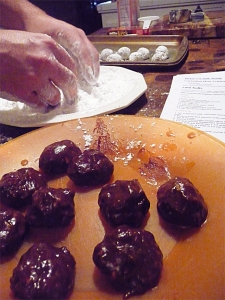 4. Add the vanilla wafer crumbs about ¼ at a time, mixing well after each addition.

Yields about 3 dozen rum balls and up to 3 dozen fans, depending on how generous you are with their serving size.

♥ Don’t be stingy with the rum. If you feel the need to add a bit more, I won’t tell.
♥ To make the wafer crumbs, I put the whole cookies in a ziploc bag and used a rolling pin. Don’t pulverize the wafers into powder; small chunks add texture to these tasty treats.
♥ Make sure and keep your hands wet (like the recipe calls for). I left the kitchen sink water running and wet my left hand before rolling each ball.
♥ After rolling the balls, they may be a little deformed. No worries. I popped them in the fridge for about 10 minutes and they firmed-up. Then I rolled them in the sugar and was able to get them shaped perfectly round. If they still aren’t to your liking, you can put them in the fridge to chill again, then roll and coat with more sugar.
♥ Use plenty of powdered sugar for the coating; I used 1 cup (vs. 1/2 cup). 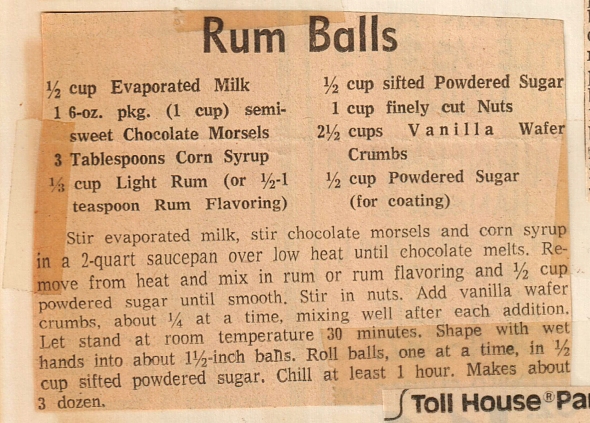