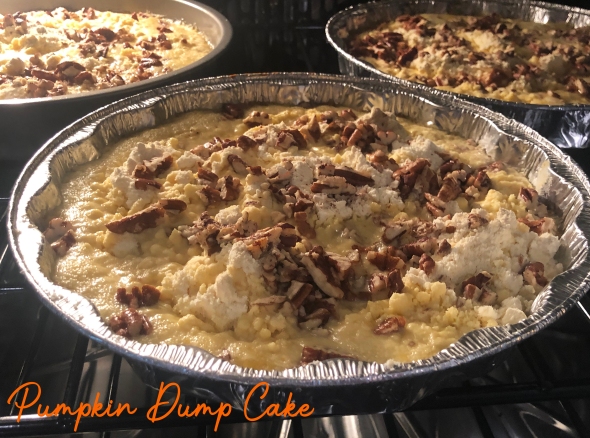 A Bit Of Dump Cake History

The folks at Epicurious describe the dump cake as “the worst name in the history of desserts.” I, on the other hand, snickered when the name first graced my being. In fact it was more of a snortle of sorts.

The year was 2005 and my Cousin Julie had emailed me the dump cake recipe below that she was impressed with. Being one of the early bathroom humor pioneers (poo-oneers?) I simply replied: “you know I’ll try this because it has the word DUMP in it!” Well that email got filed away with good intentions and sadly forgotten. This year when I was missing my Cousin I went digital dumpster diving into my old email account and a few clicks later the recipe floated to the surface (pun intended).

Before we dive into this recipe I was curious the glorious origins of the dump cake. While some online posts said the first dump cake would send us to 1980, others threw me off track saying the dump cake actually went by other names, including “wacky cake.” For my purposes my culinary etymological research is purely of “dump cake.”

As can be seen by the Google Books Ngram Viewer let’s have a peek at the usage of dump cake over time. There it was – nestled on page 50 of 1917’s The Los Angeles Times Economy Cook Book No. 5: Practical and Economical Recipes by Skilled Cooks – this nugget for Dump Cake. Albeit the recipe instructions read more like a conventional cake (think more effort), the origins of the name take us back to when my Grandmother “Nanny” was 17. You can click this link and see for yourself! I can’t wait to let this useless trivia factoid rip at my next party!

What’s even more interesting is I discovered I lived at the trifecta of perfection – when word usage of dump cake and two sidekicks near and dear to my heart – “pac man” and “bean roll” – were in pure alignment. The year was 1979 and little did I know I was living the glory days. Who knows if this moment in time will rise again? 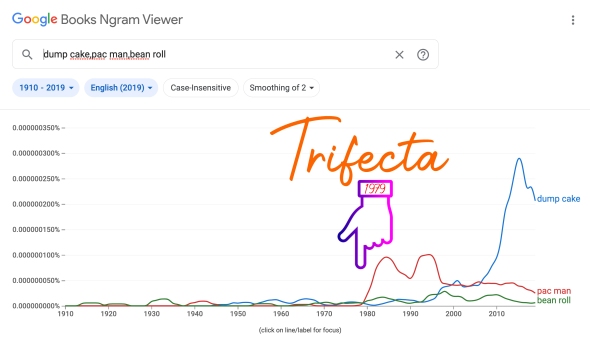 ❤  I have to admit I was leery that this cake would come together. But just as the name implies the magic of the dump cake took over once it was in the hot oven and things began to mingle.

❤  Striving to curtail holiday overeating (which later proved to be a farce) we split the recipe into three greased 9″ round foil pans. I was nervous if they would turn out OK and they did! We gave two cakes to unsuspecting neighbors who said they enjoyed it greatly.

iii. What To Do

2. Mix the first six ingredients until well blended and pour the batter into a 9″ X 13″ greased pan.

3. Sprinkle cake mix on top and then sprinkle that with pecans. 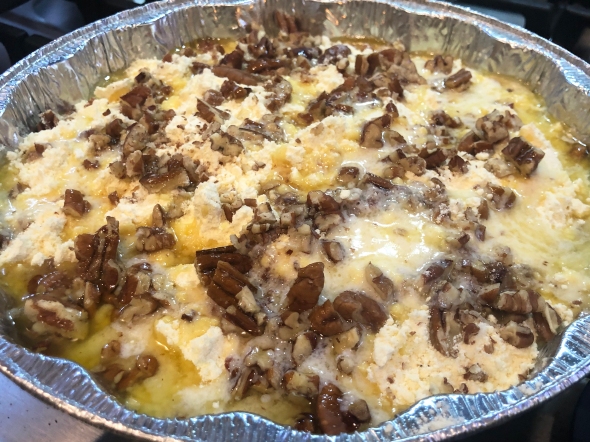 4. Pour melted butter or margarine over top. Bake for 50 minutes.

Serve warm with whipped cream or ice cream. My Cousin Julie topped her cake with dulce de leche and said it was really good!

Let’s have a peek at some vintage Libby’s pumpkin ads: 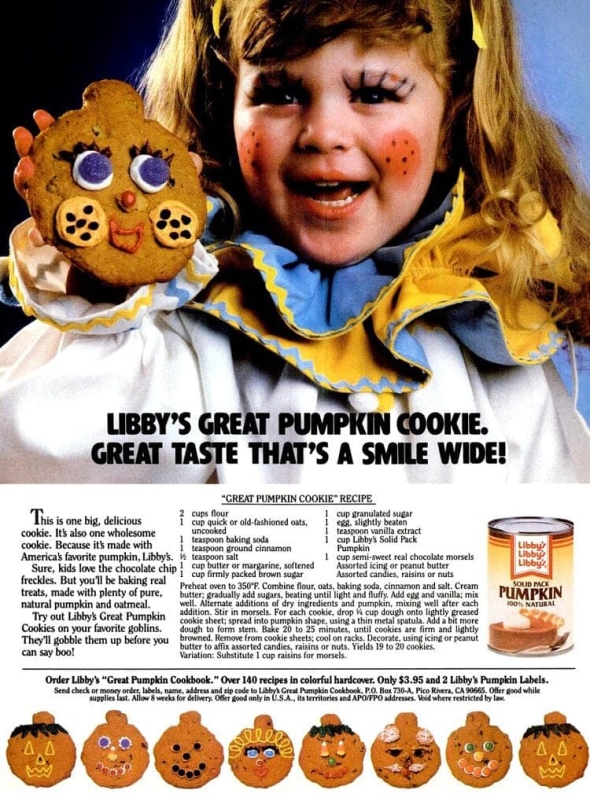 When things go wrong I’m not quite sure why “oh, fudge” became synonymous with its less appropriate saying but to me “oh, fudge” is a great thing!

Even though one of my favorite movies wasn’t created until 1983, one of the most famous of “oh, fudge” scenes was created in this passage from A Christmas Story. Before we make fudge pie let’s enjoy a bit of this timeless classic:

❤ In the 1970s we would likely have enjoyed whipped cream from the can. Thank you, Reddi-wip! These days I use my gourmet whipper that I scored at Williams-Sonoma – it really creates a great whip. When you make your own whipped topping you can flavor the creams but for this recipe we chose to go with the standard recipe.

1. Melt butter and chocolate in a double boiler.

2. To the eggs add the corn syrup, salt, vanilla and sugar.

3. Temper the eggs by adding the chocolate mixture in thirds. Turn then pour into the unbaked pie shell.

This Fudge Pie Is Ready For The Oven

4. Bake in preheated oven for 25-30 minutes (we cooked our pie for quite a bit longer – we were using our new gas oven). The pie’s center will be moist and fudgy.

To serve: Let the fudge pie rest until cool. Slice and top with some fluffy whipped cream.