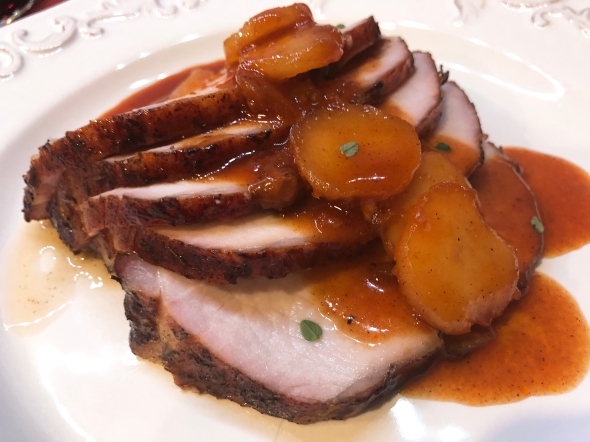 Perfect Chow For A Luau

I probably overlooked this recipe due to my first hangover in college from an untimely overdose with Kahlúa.

But this recipe doesn’t incorporate the Mexican coffee-flavored liqueur; I discovered it’s actually spelled “kālua,” which refers to a traditional Hawaiian cooking method that utilizes an underground pit oven called an “imu.” We won’t be digging any holes in the back yard for this recipe but I think you’ll find – sans the pit – that its got a delicious and warm flavor that will high five your tastebuds.

This recipe hails from my Cousin Julie’s kitchen. Hawaii held a special place in her heart; in Julie’s later years she would whisk her kids and grandkids to Hawaii for Christmas holiday. Also Hawaii fans, my Mom, “Betty,” and Dad Honeymooned in Hawaii in 1955 just 4 years after it became a U.S. state. So strap on your hula skirt, open-toed sandals, and top things off with a lei – we’re making kālua!

❤  Dry sherry vs. cooking sherry? Yeah, I still get confused. Here’s where you can get the 4-1-1 on sherry.

Keep Your Eyes On The Prize

❤  My Cousin Jennifer said Julie and the family often enjoyed this dish with taro rolls, which are funky purple moist rolls often served at Hawaiian Luaus. You can score a recipe for taro rolls here. Other great sides that Jennifer said complemented Julie’s meals were a salad, Sister Schubert’s yeast rolls, and mashed potatoes.

Allow extra time to marinate the pork. I let mine rest overnight but the recipe only calls for 2-3 hours. Total prep is about 6 hours. This is a slow-bake delight well worth the wait!

iii. What to do

1. Place the pork in a gallon-sized baggie. 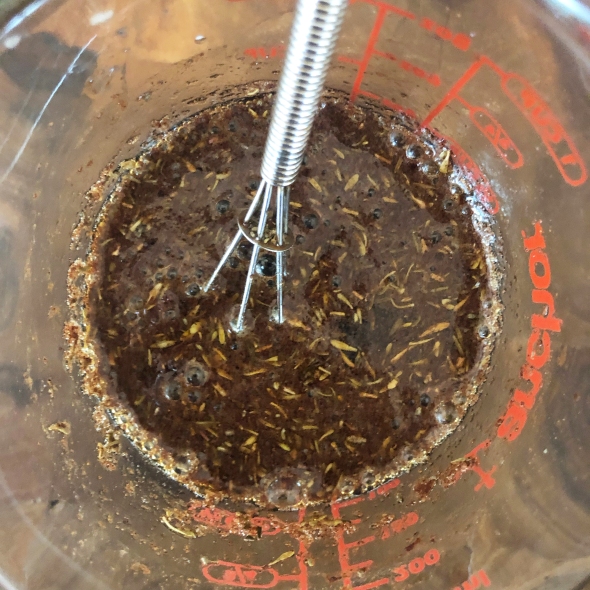 2. Combine the soy sauce, sherry, garlic, cinnamon, and thyme and pour over the roast. Marinate the pork in the fridge for 2-3 hours.

4. Remove the roast from the baggie, saving the marinade. Place the roast on a rack in a shallow baking pan and bake for 30-35 minutes per pound (about 2.5 hours) or until a thermometer registers 170°F. 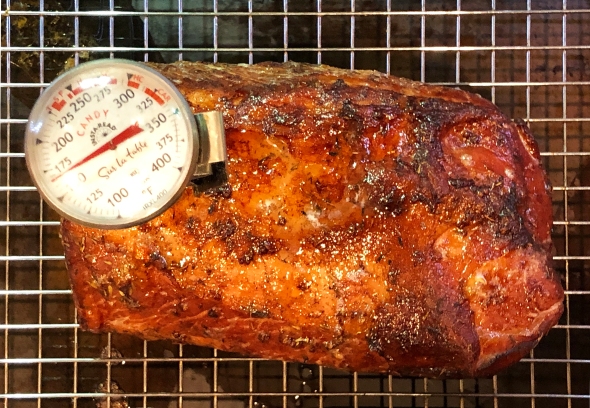 Why was I using a candy thermometer vs. a meat thermometer? Well, it’s what I had in the drawer. LOL

5. While the roast is still in the oven, in a small saucepan combine the reserved marinade, the preserves and the chili sauce. Bring the sauce to a boil, stirring often. 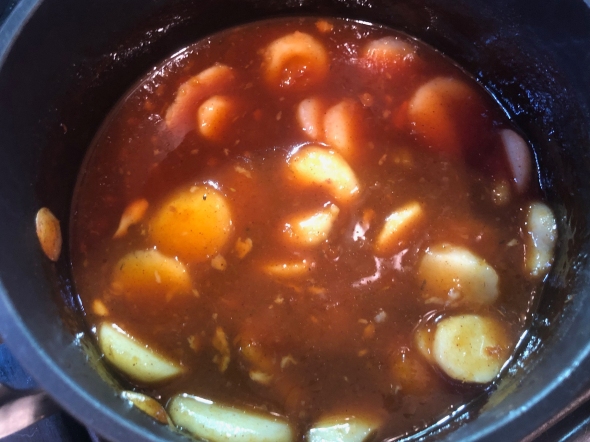 6. Brush a little of the sauce over the pork and roast it 10 minutes longer.

7. To the remaining marinade add the water chestnuts and any juice that is left from the roasting pan. Heat this through and serve on the side along with the roast. 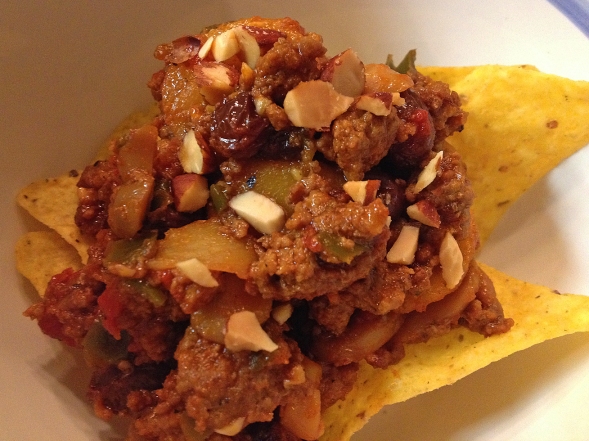 Picadillo Is My Pillow

In March 2014 my awesome Cousin Julie gifted me the recipe for this ole time family favorite.

What a great gift! I remember Mom talking about “picadillo” but the recipe wasn’t in her cookbook. Luckily, it was in her sister Delores’ cookbook that Julie has in her care!

Totally flexible, this Cuban-inspired dish made its way to San Antonio kitchens before the days of the internet … and into my heart 4ever. A foodie’s BFF.

♥  The original recipe scan below makes mountains of this delicious stuff. My Cousin Julie said the portions were large because her Mom, “Delores,” would often serve this dish at parties. I divided the recipe down, down, dowwwwwn into 6ths below. And yet after Joe and I ate it all, we wanted more.

♥  Cousin Julie was very specific – unless you don’t mind soggy almonds, sprinkle the almonds on top just before serving; or set them aside in a serving bowl with a spoon.

♥  Cousin Julie also said this picadillo freezes well. Sweet! If you freeze or refrigerate it overnight, add more dry sherry when reheating. It’s the honest thing to do.

♥  You can serve picadillo many ways – on top of scrambled eggs, breakfast tacos, nacho chips or inside tacos. This stuff is so good I even ate some with a shovel-spoon or two… :) 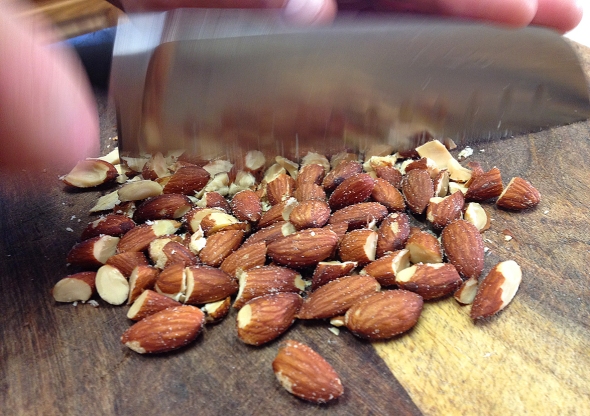 1. In a medium-sized pan over medium heat, bring the first 5 ingredients (see “marinate”) to a happy sauté.

2. Add “the mixture” ingredients (the 9 ingredients) above and simmer, covered, about 1 hour. Stir occasionally.

3. Uncover and stir until “mushy.”

4. Serve with your preferred foodie accents and style (above). And smile.  :) 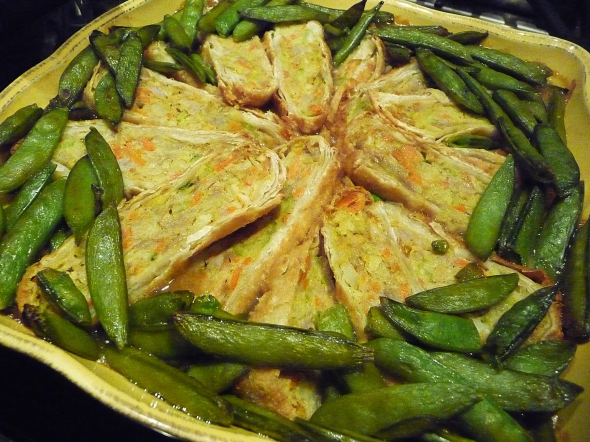 Flash back 1980s. King Wah was located in a white office building at the SE corner of Loop 410 and Wurbach road (1800 NE Loop 410) in my childhood home town of San Antonio. 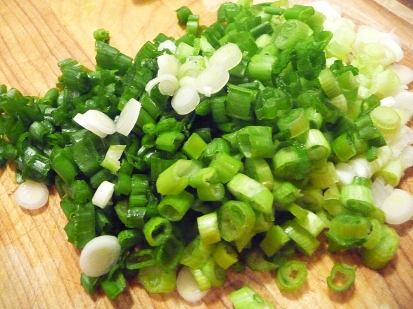 white table cloths, fancily dressed wait staff and large round tables that the expanded family would gather around. Why, there must have been 10-12 of us feeding at a single table! While I only ate at King Wah with my Aunt Sister, Uncle Bill and the wolf pack (my cousins), it was one of the few times I can remember that felt more Thanksgiving than mere Chinese dining. King WOW!

Today I live precisely 270.42 miles from where King Wah was located. But thanks to this savory lip-smacking recipe featuring the egg roll, I can relive the mouth-watering memories growing up… and the taste of the exotic orient. I will be eating this again!

2. Heat 2 tablespoons of the oil in a large skillet over moderate heat. Add Chinese pea pods and cook until pods have separated from one another and they’re tender crisp, about 2 minutes. Remove pea pods from skillet and reserve.

3. Add the remaining 2 tablespoons of the oil to the skillet. Add beef strips and cook, stirring occasionally, until the beef loses its pink color.

5. Stir cold water slowly into the cornstarch and add to skillet mixture.

6. Blend well and heat, stirring constantly, until mixture is smooth and thickened. Pour into a greased 1½-quart shallow casserole.

7. Cut egg rolls in half lengthwise and place spoke-fashion on middle top of casserole. Arrange cooked pea pods at edges of casserole.

8. Place in a preheated 350°F oven for about 25 minutes, or until rolls are crisp on top. Serve with rice, if desired?

♥ While the egg roll flavor was not specified, because this recipe calls for beef round, I suggest a simple veggie egg roll to accompany the beef.

♥ What’s a “Chinese Pea Pod?” It’s also known as a Snow Pea or a Sugar Pea. Technically they’re different than edamamme (a sweet bean). You’re likely to find them frozen vs. fresh at your local grocery.

♥ “Serve with rice, if desired?” Of course it’s desired! Get outta my way ~ I’m hongry!